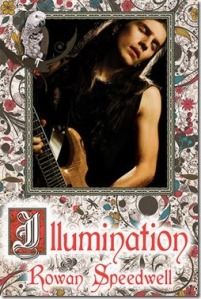 Recently, I felt like book after book I read just never got anything worth while to focus on in a review.  In any case, that’s why I have struggled with this blog in the last month.  Well, that and moving to another state!

But then I cam across Rowan Speedwell’s Illumination.  Now, this book is more than the cover, although I love the cover!

We have Adam Craig, a musician who is tired, both mentally and physically.  What used to energize and bring him a high becomes dulled and his recreational highs are becoming too much to hide.  One night, he drunkenly finds himself on a porch — owned by one Miles Caldwell.  Miles is a recluse, but he is strangely drawn to Adam.  As their relationship heats up, is it even possible for them to find a future, or is it better to walk away?

When we first meet Adam, it is clear that he lives the rock-star life style.  Lots of alcohol and lots of drugs, while we do not really get a “choir-boy” feel for him, we are sympathetic of his pain.

Adam Craig worked his way through the crowd in the hotel suite, champagne bottle in one hand, cigarette in the other.

We see a man who understands he needs to stop, but doesn’t know how to and doesn’t have the support to be able to do so.  How we see his life throughout the novel is how I think about famous people we read about online.  Their life sounds glamorous and exciting, but consider the lack of stability, the lack of friends you can really trust, and need to always be “on”.  It would drain any person.

Miles’s character development is substantial, but difficult to discuss here because it is intrinsic to the plot.  We first meet him at his lake house, hiding out on his property without having left it in years.  There are reasons for it and his history is disclosed as it unfolds.

The eyes that stared at him, still wide with shock, were gold.  Not brown, not hazel, not even amber, but gold.  Gold like the 23K stuff he used for gilding.  Gold as Cennini.  “Where am I?”

“My chaise,” Miles snapped.  “My patio, my lake.  You’re fucking trespassing dude, and you need to get your ass gone.”

We see him in the beginning as a grumpy agoraphobic gus, but with more and more interactions with Adam he finds that his current lifestyle is not enough.

I could point out several themes in this novel, and they revolve around the title, Illumination.  In the most obvious theme, their meeting brings light into their lives and it becomes Illuminating.  But Mile’s work, recreating Illuminations, is also played on.  He describes their meaning:

Miles waved his hand dismissively.  “That’s not the point.  The complexity of the design was perceived by the ancient monks who drew it as a way to describe the glory of God as a reflection of the complexity of life.  That and there really wasn’t much else to do in an Irish monastery in the eighth or ninth century.  The point is that it’s twisty and complicated and doesn’t really make rational sense.”

To help you see this, take a look at an example of an Irish manuscript:

He then goes on to describe Visconti Hours Renaissance Italian:

“Look at the bright colors, the beautiful artwork, the florals, the animals and birds and how fucking gorgeous this thing is?  It’s complex, but understandable.  Relatable.  The colors, the gold– God, Dougie, this is fucking amazingly beautiful.  You can see this, understand this, appreciate this.  This– this is Adam.”

So, what I got out of this is that Miles was like the monks of the past, living isolated, studying and replicating something intricate and detailed, but there is no emotional connection there.  And then Adam walks into his life and now he sees these things in color and details.  He yearns to be able to stay with this embellishment of the heart, but he is frightened to do so.

You can tell the difference here between the two illuminations.  I believe that was what Rowan Speedwell wanted the reader to understand.  There is more here in relationship to Mile’s work and art, but to discuss this topic further would spoil some of the plot.

I enjoyed the humor in the book.  We deal with serious topics like family death, drug use, physical and psychological damage, so sometimes we need a little giggle.

And well, anytime I get a Douglas Adams reference, my heart is happy:

They lay still and silent a long moment, then Miles raised his head and said blankly, “Forty-two?”  “The Answer,” Adam murmured.

I really can not think of anything major that I would change about this book.  The characters are not perfect, they both make mistakes, so if you are looking for perfect characters with a sweet romp, this is not for you.

I love any romance that has musicians.  Because I have come from a family of musician, when an author gets how to hear and write music and THEY GET IT, then it just makes my enjoyment of the book even more.  This book had a theme and storyline that I could identify with, which moved me and had tears falling toward the end.  There were times when I wanted to say, “just forget it, it’s too hard!”  But both of these characters did keep trying and their effort is worth it.  I will certainly be looking up other books by this author.

Autumn fire!
The rain has given us…. Water !
A hike in the mountains and then sone camping!
Relaxing weekend!
Amazing singer.
We got the treadmill in October. Can you tell? November and December are high because we had a week of vacation each. You can tell when shorter days and getting up was difficult. Change in job mid May means less stress and now the hubby and I walk 2 miles a day during the week. Started to eat healthier and got some new meds. It is never too late to try something new.