Review: The Return — by Brad Boney 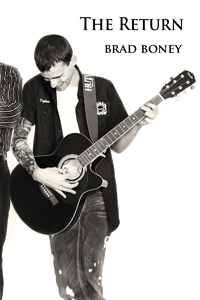 First things first:  this book review will not do justice to the novel, The Return, by Brad Boney.  So much of the book, the theme, the plot line is based on a “twist” that if I divulge it, it would ruin the surprise.  The best thing that I can say about The Return is that you have to read it.  It is more than simply a romance book:  it tells the story of two men (and their friends) who were lost and finally find home.  It has philosophy, humor, and passion, that led me to tears numerous times.

Topher (Christopher) Manning is a mechanic, but his passion is to become a musician.  While he has big dreams, his music writing has hit a road block.  That is until he has a chance meeting with music reviewer Stanton Porter.  Porter is famous and intriguing, a man who Topher yearns to learn more about.  An impromptu invitation to a Springsteen concert could mean Topher’s dream finally coming true.  But now Topher wonders if Stanton can become more than just friends?

Topher has aspirations, but while he has a lot of talent, he has never “made it big”.  How many of us have some sort of private dream that we always wanted to pursue, but either never started or just never could succeed?  I’ve always wanted to become a successful writer, but while I have written a book (poorly) I never got it published.  I’ve written lots of poetry for my love, but never published.  Topher has these dreams and the talent, just something is missing to unlock his greatness.  This novel is about how he finds that thing (friendship and love) to set him free.

Everything that I do and everything that you do — and everything that any one of us ever does — is ultimately an attempt to connect our puny little lives to that bigger something.  Nothing makes that connection like music — not a painting or a sculpture or even a book or play — so that’s why I get up on stage and sing songs.  I’m trying to plug into the  universe.

This aspect of Topher is why I love his character.  He is deeper than just some young punk who wants to become famous and bang a lot of chicks.  He finds meaning in his gift and  he yearns to do more than just be some rock star.

What’s important to Stanton is his friends.  His best friend Marvin has been there for him for years.  Stanton suffered a loss so great in the past that it broke him in many ways.  He has forsaken love and has focused the recent decades on his career.  But now, this young man, too young in his opinion, has come into his life and reawaken his yearning for a mate.

“Love, friendship, and loyalty.  That pretty much sums up what’s important to me.”

Stanton’s biggest roadblock to his own happiest is himself.  This is something else that I could relate.  We all have aspects of our past that hamper our forward momentum.  A failed marriage?  A bad childhood?  These things affect our psyche and influence our actions.  For Stanton, he has to learn to let go of the past.

There was one quote, early on in the book that struck me deeply.  So often, we are tempted to give up when things get difficult, but usually there is something that makes us push through.  But what would do that for you?

He told me that if I stopped feeling sorry for myself, I would see that being gay was actually my salvation — because without something to push against, without some kind of uphill battle, life has absolutely no meaning.

Sometimes, we need something worth fighting for, something to inspire us.

When I give a book a 5 star rating, customarily it is due to the massive amount of quotes I highlight.  In The Return, I found myself highlighting constantly.  The main characters and the bunch of characters that call them friends constantly gave memorable quotes.  One example:

That’s the whole point of us being friends.  We don’t have to face shit alone.

The other thing that got me about this book was the intensity of the writing.  Mr. Boney writes about the HIV/AIDS epidemic in the early 1980s and starkly paints the picture of the fear, shame, and devastation it preyed on gay men.   While we could discuss the improvements on science and medicine today, we can not forget how HIV meant death and how that affected the characters in this book.  I dare you to read this book and not be moved to tears.

I could spend hours quoting from this book and discussing the hidden depth to their meaning.  So often I read a romance book and find tropes or plot devices to throw our characters together.  But this novel is more like a full length character development of Topher and Stanton as individuals and then as a couple.  Keep in mind that while there are times of humor and passion, I would classify this as a “dramatic romance”.  Be prepared for a lot of tears.

And what else can I say but — “Play the long game.”  You will not be disappointed.

One thought on “Review: The Return — by Brad Boney”

Burrrrr. But pretty !
My coworker for the day.
Cold water?!
Blessed Yule!