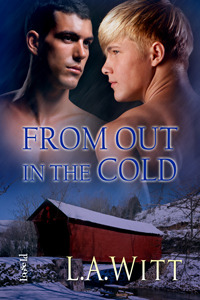 This is not first time that I have read this book, in fact, it is probably closer to 3-4 times since December.  Sometimes, it takes me a few readings to figure out nuances throughout the book.

Neil’s life feels out of control, a recent trauma has resulted in PTSD.  His homophobic, but well-meaning family is calling him home for the holidays.  Torn between staying at home alone or torturing himself,  Neil struggles to commit to the Christmas holiday trip.  But before that happens, Jeremy Kelley, an old friend and flame returns to his life.  Jeremy returns from war with his own hidden pain.  Are the two of them strong enough to make it work this time?  Or is the damage just too great?

There are some aspects of Neil that I do not want to go into and spoil the plot.  Let me just say that Neil struggles from his own case of PTSD and grief, even though he is not military.  His family, while loving him is uncomfortable with his sexuality, so ask him not talk about it when he visits.  This makes his visits home infrequent and his yearly smoking habit earlier in the year.

The tiny kitchen window offered an angled view of the balcony, and I watched him from the corner of my eye as I washed the dishes.  As he smoked his cigarette, his hands were shaking.  It was cold as fuck out there, but that was more than shivering.  If I wasn’t mistaken, they’d been unsteady before he’d even gone outside.

Witt does an excellent job of utilizing characters’ dialogue as well as physical actions to slowly build a picture of each character.  She does not just blast out an overly simplistic version of a character, but takes the time to develop it.  We see that Jeremy has noticed the changes in Neil and is concerned and confused.

Jeremy has returned from his tour of duty with the military, suffering from PTSD and his family refusing to see him as he was outed as he returns home.  Now he is completely alone and suffering. He has no friends, no family, no job, and no place to live.  He winds up on Neil’s doorstep one freezing winter night. In Neil he finds someone who can understand his pain and fears:

So what if we were two men who’d briefly been lovers and were now lying this close on a bed?  I didn’t let myself read anything into it.  At this point I’d  been so starved of human contact for so fucking long, the only thing that mattered was that someone was touching me now.  Someone who knew, and who got it.

What I liked about this book is how we get to see both characters emotionally bare.  In this quote, we found how Jeremy is so lonely and bereft of human contact.  We see Neil and Jeremy begin the novel as friends and through their shared experiences they find themselves falling in love.

Remember R.E.M?  This book reminds me of their song, “Everybody Hurts”.

When your day is long and the night
The night is yours alone
When you’re sure you’ve had enough of this life, well hang on
Don’t let yourself go
Everybody cries and everybody hurts sometimes

Within the novel of From Out in the Cold, we have a similar theme that everyone hurts and everyone needs help.  From Jeremy’s perspective:

I wished I could say it had been a long time since I’d had a flashback like that, but it hadn’t.  They happened too often and too easily.

Thank God he’d been there tonight, and not just because he knew how to bring me back to earth.  Even before I made the connection that he’d grounded me, I’d been relieved beyond words when I realized he was there.  The second I looked in his eyes and realized it was him, a sense of safety and calm had cooled my blood, and I’d known in that moment that it would be over soon.  That I’d be all right.

You’re here, I remembered thinking, so I can breathe.

So for me, I found the theme to demonstrate that while these two psychologically wounded men, but not incapable of falling in love.  It through their own understanding of pain and fear that they can accept that in each other.

Recently, it seems that more books published contain the first-person perspective.  This is normally a problem, because it limits gained insight from both main characters.  So, the answer that some authors choose is to do first-person, but switching between characters.  The problem comes when it feels like head-hopping and becomes confusing.  Yet, Ms. Witt does a fine job with this and I actually enjoyed the switching.

What is family?  What is the saying, “You can pick your friends, but you can’t pick your family?”  Within the pages of this book, we see that both Neil and Jeremy’s families are not perfect, in fact, some of the strongest pain has come from them, yet the main characters find they made their own family unit with each other:

But here, in the Daltons’ living room with Neil’s hand on my knee, I had everything I needed.  I had hope that the weight on my shoulders wouldn’t be there forever.  I had a family who picked up the ball mine had dropped.  I had Neil.

This book illustrated how difficult it is to come-out and that there are consequences that can result in pain: a newly formed family based on love and acceptance rather than blood.

I am not sure if it is really that it should be “better”, but I wished that the book had been longer.  Granted, the length fit the scope of the story, so I suppose what I really want is a follow-up book about what happens next.

If I had any true complaint, it would be related to the sex.  The scenes felt more impersonal than sexy at times.  I felt more connection in their other interactions rather than the sex. It did not hamper my enjoyment with the rest of the book, but I do think it dropped it from a 5 star to a 4 star for me.

The book is not perfect, but it is one that I have read numerously.  Both characters have faults and pain, but they are not afraid to show each other their fears.  We seen that these men find acceptance in each other and learn they are still capable of love.

This is an author that I will definitely read again.

From NPR. I know I have heard of the divorce rate many many many times before. But 50% seems so large in my mind. Maybe because for the last 14 months the husband and I have not been out of each other’s eyes. How are we still honestly happily married? I can only assume it has to do with the hubby’s ability to compromise. And we always talk about our issues and do the “psychology speak” when we have misunderstood each other. I am grateful to my husband and glad to be married to him. 😍
Beautiful day. Small hike of 2 miles.
Peaceful night!
Happy Beltane!
Cooking out in the back yard tonight!
A magical night and morning. Time to head back home.