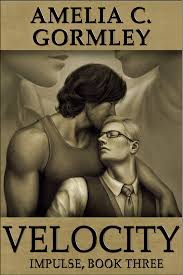 The novel, Velocity, by Amelia C. Gormley was supplied for review by the author.  Also note that this was an advanced copy, so the final version might differ.  While it should be obvious to say, this is an honest review and I was not influenced by any action of the author.

The series is Impulse by Amelia C. Gormley and Velocity is the third (and final?) installment.  This review will cover the entire series, but focuses on points and quotes from the last book.

For my previous assessment, go to these reviews: Inertia and Acceleration.

“Take off your shirt.  Right there.”

“Gav-” The protest died on Derrick’s tongue as Gavin’s eyebrows came up, his gaze full of challenge.  He looked delectable there on the floor, in his suit pants with his shirt sleeves rolled up and his collar open, the glasses he still wore adding a brainy touch that drove Derrick wild.  Derrick had come to know that expression well since they’d begun seeing each other.  It was a look that said he could use his safe word, but nothing short of that would dissuade Gavin.

Derrick knew the reaction intimately — the need to test the restraint.  Not to escape, but to feel more held.  He’d done it himself dozens of times since he and Gavin had begun seeing each other.

For my previous assessment, go to these reviews: Inertia and Acceleration.

Gavin continues to be a sexual dominant to Derrick, but in many ways, Gavin is the emotionally tentative partner in Velocity.  He also has a great dichotomy of character.  Sexually, he is extremely dominant, but not exempt from an abusive partner.

“But it’s also what abusers do,” she added gently.  “How do you think they keep their victims with them for as long as they do and lure them back in when they try to leave?”

Gormley brilliantly demonstrates how just because a man might be a dominant, this does not mean his is infallible or all-knowing.  Doms can be fooled and abused just like any other person.

He makes the same mistakes we all do.  His entire action and perceptive with Lucas (ex-boyfriend) is completely wrong and as the reader we race to watch him make these mistakes.  It is extremely frustrating to watch him navigate through this portion of the story, knowing he is making mistakes and cannot stop him.  But we understand that because he fees like he cannot control the HIV, he tries to control the Lucas situation.

From my initial post, I noted that the theme revolves around the series title “Impulse”.  The series is about movement; take the name of the series, Impulse.  It is defined as a “moving force,”  “sudden desire”, or “pulse of electrical energy.”  In all of these cases it results in action.   The title of the novel is “Inertia”, the antithesis and is expanded into the theme.  So often in life our environment, family, friends, and experiences bind us.  This lack of  “movement” is a roadblock to change and personal growth.  In Velocity we see the illustration of what motivates individuals and a couple to drive forward in life together.  But is all movement good?

Devon shrugged.  “There’s change, then there’s change, man.  Changing the things holding you back, that’s good and all, but if you’re making a change that’s no good for you just because he wants it, how’s that any better than when not changing wasn’t working for him but it was for you?  All I’m saying is: you ain’t got much left but memories.  Show that some respect.”

One thing that I loved about the book was the humor, such as when Derrick and Gavin picked out their christmas tree:

“Nope.”  Derrick circled a perfectly conical tree, inspecting the spacing of the boughs with a critical eye, looking for bare patches.  “Doesn’t mean the cider and fire’ll go to waste, though.”

“I like the way you think.  That one’s good.  Let’s commit our ritual act of arborcide and get someplace warm.”

This story came out in three book installments.  I think I would prefer to have one book and read it at one time.  Because the story leaves off at the last book, I had to play mental catch up, 6 months later when the next book comes out.  I think that this issue will not be a problem in the future as brew readers can just move to the next book immediately.

First:  I am not an expert in the BDSM lifestyle.  This is only my opinion, and I fully admit that I could be over-thinking this concern because I am by nature, a cautious person.  While I liked the play and how subtle it was, I am a little concerned about how people who are not familiar with the play and lifestyle might take it.  For example, if the reader has no experience in the lifestyle or reading about it, I would be nervous about the lack of emphasis on safety and that these two type of play (humiliation and breath) are not considered “entry-level”.  Because the play was so subtly built into the relationship, I fear that the danger aspect might be insidious.  Of course, it could be that most readers would discount the sex scenes as “kinky” and move on; I just tend to look at the detail.  Take this scene for example:

“I’ve got you,” Gavin said tenderly.  “Ride it.  Let it happen.  Just keep your hand on my shoulder.  That’s your only job.  I control the rest.  Even the air you breathe is mine.”

Gavin’s hand sealed over his nose and mouth gain, and he resumed his firm strokes up and down Derrick’s cock.  His palm curled around the head at the end of each caress, twisting and circling.  He clamped his hand more firmly on Derrick’s mouth as the instinctive tension took over again.  He held Derrick down, held him captive to those glorious, merciless strokes.

After the second breath Gavin allowed him, the quivering need to thrash and resist abated.  Even as his chest heaved, a beautiful, detached peace descended.  Divorced from the useless struggle of his body’s own drive for survival, Derrick floated on it, surrendering to the pleasure that came in increasingly powerful waves with each pass of Gavin’s hand up and down his dick.

Overall, I really enjoyed this series.  The author’s choice to make such non-typical characters was brave and risky.  I think that for the most part she was successful in portraying their character development.

This is a very strong start for a new author.  I look forward to see how Gormley grows as an author and I will certainly read any new books she pens.

Autumn fire!
The rain has given us…. Water !
A hike in the mountains and then sone camping!
Relaxing weekend!
Amazing singer.
We got the treadmill in October. Can you tell? November and December are high because we had a week of vacation each. You can tell when shorter days and getting up was difficult. Change in job mid May means less stress and now the hubby and I walk 2 miles a day during the week. Started to eat healthier and got some new meds. It is never too late to try something new.