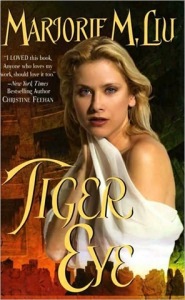 I will go on record to say this series is tied with J.R. Ward’s Black Dagger Brotherhood series for my favorite romance series.  I have read Tiger Eye, by Marjorie M. Liu, at least 10 times.  As I have said in the landing page, Dirk & Steele Series, Ms. Liu does not make the story a vehicle for the romance.  She truly writes to tell the story, and there within is a quality romance.  The relationships that develop are authentic (the interactions between the characters, not shape shifting).  Dirk & Steele is a unique series that include several themes throughout the books.

Tiger Eye is the first installation, so there is exposition of the world, both the agency as well as shape shifters.  Delilah Reese buys an old box from a local Chinese woman while traveling in China.   The box magically contains Hari, a cursed shape shifter.  What is the problem with Hari?  He is mystically tied to the box and the owner, his Master.  The Magi who initially cursed him two thousands years ago now searches to reacquire him.  In addition to this danger, Delilah has another force attempting to kill her.

As I stated before, Dela’s grandparents (Nancy Dirk and William Steele) started the agency of Dirk & Steele out of an older organization, to utilize the special psi-gifts of the members.  At the beginning of the Tiger Eye, there are active 25 agents divided between the two coasts offices (New York and San Francisco).  We get some backstory that I will not mention here that will unfold throughout the entire series, not just in Tiger Eye.

Dela is a strong, capable female lead.  This is someone who can kick ass; she understands her psi-gifts and has a positive supportive environment.  Many of my previous reviews have had “broken” females, and this story is less about fixing Dela, but rather the threat surrounding Delilah and Hari and their relationship development.  Dela is comfortable being herself:

“I am not that kind.  I am not a mystery.  I’m just… me.”  A woman who preferred solitude to a crowd, who kept her distance from strangers—from anyone who would be afraid of her secrets.

What I enjoy about this character is the ease in identifying with her.  How many of us are introverts, not wanting to stand out in a crowd?  We all have aspects of ourselves that we are self-conscious and we hide from the world.  Here we see that Dela is self-confident, but not selfish or self-centered.  Dela is a metalworker artist who makes various things ranging from statues to weapons.  She has an affinity to metal (an offshoot of telekinesis).

I loved Hari.  Ms. Liu gave Hari effective thought processes and dialogue for someone who was from a different age and difference social norms. Hari has such a gentle soul, hidden within his large 7-foot tall warrior body.  A quote:

“At the core of you burns a pure bright flame, and it is made of kindness.  That’s why I can’t turn away, why I’m not afraid.”

He is a larger than life, powerful animal of a man, which it is contrasted by the gentle soul inside.  I remember reading somewhere that the actor André the Giant (7-feet tall), but he was very sweet and sensitive.  So often we see these heroes super powerful and super hostile.  But here we see someone who yes, can kick butt when he defends his loved ones, but he is not this aggressive, animalistic he-man who picks fights constantly.

There are several themes that run throughout the series.  The first theme revolves around acceptance.  In life, we struggle to do what is acceptable to our family, to our community, and to our society.  Very few people are “normal” and fit into that perfect mold.  This series demonstrates acceptance and even celebrates our differences:

“Do not ever be sorry for who you are,” he told her, the coarse tone of his voice softened by the genuine concern in his eyes.

The other theme is to depend on yourself, sometimes everything and everyone will leave you and all you have is your own courage and smarts to get you out.  Dela reflects:

She saved herself, in the end.  That’s the thing about psi-powers-you can’t really rely on them in a crisis, even if you want to.  Sometimes courage is the only thing you’ve got.

We find that throughout this series we have main characters making hard decisions to either save others or themselves.  These themes are a macro/micro view: we need our friends to support us as we are and we need to be able to rely on ourselves.

The best thing about this series is the writing style.  Ms. Liu has a way of drawing multiple threads of story, interweaving them into a tapestry.  Her ability to get into the character’s mind, both the male and female is amazing.  Her knowledge of the world, obviously based on her own personal life really helps the realism of the story.

Truly I find it hard to find anything wrong about this book.  I will say that Delilah and Hari do fall into a friendship quite suddenly, but I did not find it that hard to believe.

I could have picked dozens of quotes from this book, and I tend to gauge the quality by memorable lines.  Ms. Liu does such a good job of penning philosophy into the story seamlessly.  There are very few authors that I put above Ms. Liu.  This series does not shy away from the dark side of life, while there are HEA endings we are not guaranteed rainbows and ponies at every turn.  There is blood, pain, horror, and evil, which when you think about it, life rarely gives us rainbows and ponies.  What this book does at the end of the story is that we’re all different and it’s ok; there is a place out there that we can fit in and be ourselves. 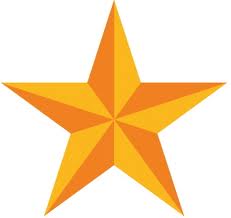 Burrrrr. But pretty !
My coworker for the day.
Cold water?!
Blessed Yule!